My first recollection of Elvis goes back to my early childhood, when my parents gave me a few K-Tel 8 Track cassette tapes filled with, what the public would only find out years later, were unlicensed copies of Elvis’ biggest hits. It was 1977, and I was 7 years old. Everyone else was listening to Disco or Hard Rock, but here I was, the next generation being raised on Elvis. I can still see my mother in the Woolco store – what would be today’s Wal-Mart – digging through the wire frame bins filled with K-Tel cassettes featuring all sorts of recording artists. From out of those bins came the Elvis tapes, the very tapes that would effectively turn me into an Elvis fan for life. I also have a vivid recollection of being in the exact same Woolco several months later. I was in line with my mother at the checkout counter, swinging from the aisle dividers, when the news cut through the air over the PA system – Elvis was dead. I remember being in a state of disbelief. I had only recently become acquainted with Elvis and his music, but the news went right through me. That moment is forever frozen in time in my mind. I suppose it’s akin to how people remember exactly where they were when they first heard that John F. Kennedy had been shot. 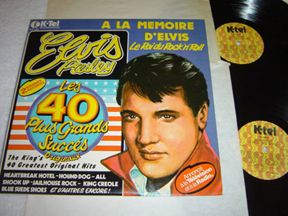 This was the 70’s, and we were the generation of kids who were lucky enough to each have our own personal hi-fi stereo along with a black and white television in our room. Many nights I would go to bed and fall asleep to Elvis’ music playing softly in the background. In retrospect, I have a feeling that listening to his songs while drifting off must have subliminally deepened my attachment to his music. One thing’s for sure: those 8 track tapes sure saw a lot of mileage! One day, with Elvis’ voice suddenly sounding like it were melting in the sun, one of the tapes ground to a halt. Upon retrieving the cassette from the mouth of the beast, I realized that the tape deck had started to eat its precious ribbon innards. Panic and crying ensued of course, which led to the “mom and dad will save the day” moment. They carefully managed to split the plastic casing into its respective male and female counterparts, extracted the partially digested ribbon, and proceeded to operate. They cut out the wrinkled and twisted section and joined the ends together with a piece of clear scotch tape cut to the perfect width. The spliced version was now scarred, with one song suddenly cutting off and bleeding straight into another one, but at least it had been salvaged, and that was all that mattered.

All these years later, after surviving the 80’s, 90’s and the millennium music scene, I find myself looking back to Elvis for comfort. I’ve been listening to Elvis Radio on Sirius XM Satellite Radio for almost 5 years now, and I must admit that it has been a huge source of inspiration for me. The DJs that work there are absolutely incredible. I’ve learned so much about Elvis and his music thanks to their amazing stories and interviews. My favorite segment is the George Klein Elvis Hour that airs from 3 pm to 7 pm every Friday. George Klein (a.k.a.: GK) is without a doubt the closest one can get to knowing Elvis himself, because he was there from the very beginning, from ”That’s All Right” to ”Way Down”. George’s friendship with Elvis started at a very young age, when the two boys met in the 8th grade while attending Humes High School in Memphis Tennessee. GK quickly became one of Elvis’ few trusted friends around the time he started recording at Sun Studio. He started out working as a disc jockey and was the first DJ to play many of the first rock n’ roll records ever recorded. However he would soon find himself working for Elvis as a “personal travel companion” leaving the DJ world behind for several years. It’s an incredible story, one that criss-crosses back and forth between Memphis, LA, Vegas, Hawaii, and many other places including Vancouver, Canada. George would eventually return to radio as well as go on to host his own television show. I highly recommend to anyone who wants the real story behind the birth of Rock n’ Roll to pick up George’s book, “ELVIS: My Best Man”. You don’t even have to be an Elvis fan to enjoy this book. It is filled with incredible personal stories about George, Elvis, and the Memphis Mafia, but is also chock full of rock n’ roll trivia and stories which feature many of the artists who were there when the big bang happened. It reads with a sort of fly-on-the-wall perspective that sends you back in time. You really get a sense of what it was like to be just ”hanging out” with Elvis.

GK’s show inspired me to start writing about Elvis – the Elvis I Know. I have no idea how many books have been written on The King, but I would venture to say that there are quite a few. Still, I could not stop thinking about all the subject matter I wanted to cover in this BLOG. I was convinced that there was room for my voice too. Some day, when I feel I’ve finally got it all blogged out of my system, I plan to amalgamate all the entries and turn them into a book. So, now you may be wondering, “Is there anything left to talk about?”. Well, I’d like to go out on a limb and say, YES!

The mission: To share with you the influence that Elvis has had on my life, while at the same time aspiring to tear down the stereotyped caricature of the man that, sadly, is embedded in the psyche of popular culture. I would also like to reach even non Elvis fans and perhaps, convince them to, stop, look, and listen to what I have to say about Elvis. I’m going to delve deep into his voice and analyze why it is that his register, tone, unique sound, and singing style has affected so many people in such a profound way. I’m hoping that I will be able to capture in words, the ethereal quality of his voice. I plan to put some of his best known and least known songs under a musician’s microscope, as well as specific moments from the 68’ Comeback Special, to reveal the talent and genius that was Elvis Presley.

I’ve been listening to Elvis’ music for 34 years, and I’m still discovering new things in songs I know so well. With this BLOG, I’m setting my sights on a specific course, but I do plan to go “off road” on this adventure. I have lots of great Elvis stories to share with you and truly hope you will follow me on this personal journey.