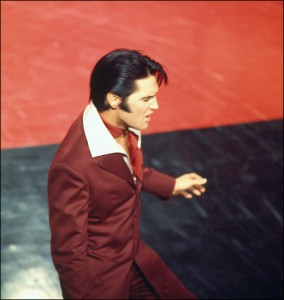 In my previous chapter, I delved into Elvis’ voice by showcasing certain songs and song excerpts in order to bring to light the unique vocal ability that he possessed. In this chapter, we’ll be looking at songs that show how much more there is to Elvis than “Don’t Be Cruel“, “Blue Suede Shoes” and “Jailhouse Rock“. Most of us have heard about how much Elvis loved gospel music, yet up until recently, I’d never purchased any songs in this genre, which in hindsight I find very odd. It was the gospel song “Run On” that I heard playing on Elvis Radio that really caught my attention. A quick iTunes search revealed that the song was part of a 24 track gospel album called  “ELVIS | ULTIMATE GOSPEL“. I glanced at the tracks, recognized a few other songs by name, and within seconds I was downloading all 24 tracks. Priced at 7.99$, it was a no brainer! I immersed myself in the album and discovered what I consider to be some of his most beautiful recordings. I’d always thought my Elvis catalogue was quite extensive, but as I soon realized, something special had been missing all along – this magnificent album.

I had no idea I would be tackling Elvis’ gospel material so soon into this endeavor, but as I mentioned in my first chapter, “I do plan to go “off road” on this adventure”! I’m going to devote this chapter entirely to this gospel album and walk you through some of my personal favorites, starting with “Run On”. You can start by listening to the track which is posted just above this paragraph. Make sure you’re in a quiet space, close your eyes, and listen carefully. It’s the kind of song that grows on you rather quickly, so as you read on, feel free to go back and play it again and again. This song, and many others on this album, accentuate the incredibly talented back up singers that Elvis worked with. The song leads in with a piano intro, and is followed by this wonderful African style humming which sets the tone for the entire song. (The humming reminds me of the wonderful black choir Lady Smith Black Mambazo that Paul Simon used on his album “Graceland“, and specifically, the song “Homeless” from that masterpiece. If you don’t have that album, it is a must!) In the second part of the chorus, the back up vocals almost overpower Elvis’ voice, yet it works. Pay close attention to Elvis’ great sense of timing and vocal phrasing – it’s really superb. This is a lot harder to sing than you might think! The song is locked into a tight groove from top to bottom and the male voices are big, full, and spot on. And for those of you, who, like me, really enjoy good lyrics, this song delivers. I love the last line of the the 3rd verse: “That’s all brother you’ll knock no more“!

“How Great Thou Art” is surely considered his signature gospel song. In the gospel genre, it’s the tune that receives the most airplay on Elvis Radio, and, being the only Grammy winning single for Elvis, it’s understandable to see why it gets so much attention. It is without a doubt a beautiful song, however, I’m going to focus on a few select tracks from this album that have called out to me personally. Let’s listen to another great toe tapper, a song called “I, John”, posted above. One of the things I feel distinguishes Elvis’ production is his choice of vocalists. Listen to that fantastic base singer! His part is so important to the overall sound of this song – it’s like the bedrock that Elvis and company build upon. How many bands or artists today make use of a base vocalist? The trend is to look for vocalists that sing up high, but there’s this whole other sweet spot way down low that rarely gets explored.  I’ve also got a thing for songs where the singer can jump up an octave in the chorus – watch for it at “Way up in the middle of the air!” It’s so sweet.

Elvis had an amazing musical ear, which I’ll be exploring in greater detail in an upcoming chapter. Although never officially credited, he was very involved with the production of his music. Elvis knew what he wanted and would work with his musicians until he got it just right.

Elvis’ voice comes in many different flavours and colours. In “Milky White Way”, we hear him interpret this song using what I would refer to as his gentle chest voice. He takes a soft approach to all the notes, letting them stretch and melt slowly into each other. If you listen closely, he’s just on the cusp of needing to switch to falsetto, yet he sings the whole song in his chest voice easily reaching the top of the highest notes without sounding like he’s straining. Listen carefully as he transitions from deep, low notes to the highest notes – it’s a thing of beauty. Compare this song to somthing raw and gravelly like the live version of “Lawdy Miss Clawdy” from the 68′ Special and you can see just how versatile he was. “Milky White Way” is not a “big” song, nor is it a power ballad; it is light, pure and a superb example of Elvis’ ability to “care” for a song.

I’ve recently come to understand that one of the great things about Elvis’ gospel music is its universal appeal. I truly believe that people of all faiths can be drawn into the beauty and majesty of these songs. Lyrics aside, the music is beautiful and has the power to touch people deeply. Marc Cohn‘s 1991 hit song, “Walking in Memphis“, culminates with a line that goes like this: “”She said “Tell me are you a Christian child”, and I said, “M’am I am tonight! “” The verse from which this line comes basically evokes how the musician is feeling after he’s been invited to play along with Muriel, the black woman playing piano in a Mississippi club after he’s recently visited Graceland, Sun Studio, and witnessed a sermon given by Al Green. He’s overwhelmed by the entire experience, and specifically the spirit of the gospel music he’s been listening to all night. Songfacts.com has an excellent write up about it!

We can still find gospel influence in contemporary popular music if we look closely. Peel back the layers, and you’ll see that U2‘s “Still Haven’t Found What I’m Looking For” is a gospel song disguised as a rock song. Check out The Edge talking about it in the video clip below from the Rattle & Hum movie.

This song is a great example of what Elvis was talking about in his 68′ Comeback Special when he said :

“Rock ‘n’ Roll music is basically, gospel and rhythm and blues… it sprang from that.”

I was a teen when Elvis Presley began singing, but very few of his songs appealed to me: I grew up in a family of classical music lovers. Last year I found a station that played nothing but Mr. Presley’s music, including the several takes required to make a master that satisfied him, his live concerts, and informal recordings of his in-studio and at-home jam sessions. I’m 64 years old, and I’ve never heard anything like Mr. Presley’s voice. I still don’t “like” everything he sang, but he has no equal among recorded singers. He could, and did, sing anything. When I read that the great tenor, Placido Domingo said, “He had the voice I wish I had gotten”, I listened a little harder. Musicians themselves still place Mr. Presley at the top of their lists of excellent singers. If you don’t, you haven’t listened to the whole body of his work. Frank Sinatra sang for 60 years and recorded three times as many songs as Mr. Presley did in his scant 23 years-career, but even his magnificent voice pales beside Mr. Presley’s. We lost him too soon, to overwork, to the damage his grueling schedule did to his body, and to the emotional damage caused by the isolation that was the price of his fame and of the ardent devotion of his legion of fans. We are the poorer for his loss, and music was deprived of the chance to grow from whatever his next inspiration would have been. I repeat, if you don’t agree, do some listening — there are more than 800 pieces of Mr. Presley’s music to hear several times, to study, before you put his name anywhere but at the top of the list of outstanding singers of recorded music.